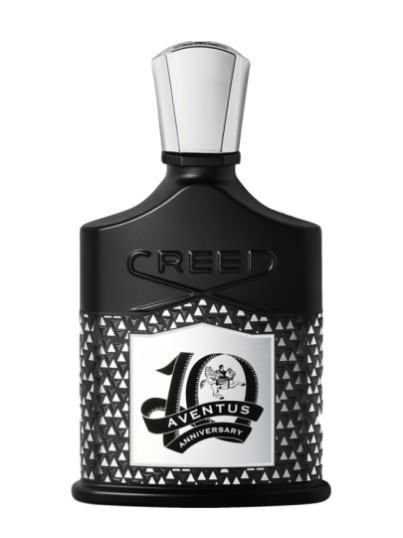 Creed
Aventus for Her

Fragrance One
Office For Men

I've tested this a few times now-
And decided not to get a bottle..

It is Aventus but it's also a little different. It's a little different in the opening and it's a little more tart, citrus heavy as opposed to juicy, piney, pineapple heavy like usual. It honestly smells more like CDNIM than regular Aventus oddly enough. Maybe it's the addition of ambroxan because it is definitely more woodsy..

This is my first bottle of Aventus ever, and let me say this: I have tried dozens of clones and alternatives, and none of them reach the perfection of actual Aventus. I own Bond.com and Pineapple Vintage Emperor Extrait, and I have tried Club de Nuit Intense Man, Hacivat, Mancera, and Explorer. Nothing comes close to the real Aventus. If you don’t have a bottle yet and you want one, I highly recommend you buy this limited 10th anniversary edition because it will hold its value.

Have had this for about a week. The bottle is ok, what bothers me is the longevity; it is a skin scent within an hour, strangely.
Someone mentioned that it lasts longer than their older aventus batch, in my case it is very much the opposite. Hopefully it will mature and get better because the scent is very nice.

Edit: I own several bottles of the original Aventus to compare with. This particular version is by no means bad, just a bit weak in terms of opening and lobgevity! Can't say that I am dissapointed because it is still fantastic, and a nice collectible!

I am now the Proud owner of the Anniversary edition bottle. The question everyone wants to know, is it different from the original? The answer is....... No.

I’d say it’s 98% the same. The other 2% could just be a batch thing more than a difference in composition. I don’t get any of the new notes listed, although it is very fruity compared to my other batch from earlier this year. So maybe the melon and additional notes have added to that. I’d say it’s woodier also. But we are talking minuscule differences here. I’m really searching for the different nuances. Like a previous post said, if you love Aventus you will love it, if you hate it you will hate it. It’s as simple as that really.

The longevity also seems to be a bit better than my previous batch. But again, we are talking little differences.

I’m just happy to add this to my collection and to use it very sparingly.

The bottle also doesn’t look as bad as the promo pictures. I’m happy with it.

A minute of silence for Mak-7.

Just bought a bottle and it is the same juice as the regular Aventus. Might be an investment for the future due to the limited nature.

The notes listed here on Fragrantica are verbatim from the noseparis website. The note list there was there even before reformulation. Please don't think this is going to be any different then any other 20 batch.

I'm not an Aventus fan, and i dont follow the hype, but one thing i know, this is just the same thing, on a diferent bottle.

Btw why use Ambergris and Ambroxan together ? Ambroxan is a synthetic note, which was discovered in the 1950s as a replacement for Ambergris.

It does sound like it might be something akin to a cross between Aventus Cologne and Aventus, erring on the side of being closer to the original. I'm intrigued enough by the melon note to deem it worthy of buying 'blind' - particularly if it truly is limited in its distribution (I would suspect it probably isn't). The bottle is atrocious, though. I'll update this with a proper review when it arrives.

EDIT 18/9/2020: So my first impressions are as follows: it's Aventus. Obviously. There ARE some differences to previous iterations of Aventus. I'm not sure if there's more variation than you would otherwise expect with a 'batch variation' however I'm describe what I smell...

It's fruitier than most Aventus batches. I think it has orange notes in it and, to my nose, certainly smells like they've combined something of the fruity accord from the Aventus Cologne. I'm not sure I get melon per se but there's something like that in the opening but, again, it could simply be 'more' of what they're calling pineapple. It settles down to be a mostly bergamot fruitiness, however, which is a little disappointing.

I get noticeably more leather in the base. And in fact some more prominent patchouli, too. It's hard to differentiate the two given the blend, they work alongside each other.

This biggest change for me is what smells quite glaringly like ambroxan. I can't say I've smelled this in 'normal' Aventus before. Perhaps I hadn't been paying close attention but it smells very much *not* like ambergris and a lot like a bergamot and ambroxan combination that, dare I say it, evokes something of the Dior Sauvage (which, in my opinion, is very much inspired by Aventus). It makes it smell clear and fresh and there's a lot of that 'aromachemical' smell going on.

Overall, I wouldn't seek this out on the basis of scent alone. I don't think it's any better or even significantly worse than previous batches of Aventus. I, personally, like the fruitiness but I'm much less impressed by the ambroxan which I'm hoping will become less prominent, or at least less noticeable, over time. Dare I say it, but this actually reminds me somewhat of Abercrombie & Fitch's Authentic Man: which had something called clearwood in, I believe, which is apparently a synthetic patchouli. There could easily be something like this in here, but overall the sensation of having all this ambrox in Aventus is one I'm not majorly enamoured with. Still, it's Aventus. It smells better than the A&F, obviously.

Of course, allow room for maceration and further impressions etc etc but overall I think it's 'fine'. It's ok. It's still Aventus, it smells like Aventus, just with more fresh ambrox and aromachemicals and, to my nose, does veer it towards the Aventus Cologne territory. Perhaps this is simply what 2020 batches smell like but these are my honest first impressions.

Performance is weak. I assume that will change over the next few months due to maceration and I'm probably going to put it away from at least a few weeks in not months to allow this to occur.

The bottle is also nicer in 'person' than the graphic suggests: it's a nice matte black wrap, while the triangle patter is textured/raised which helps when holding it (if nothing else!). The label and general style doesn't appear quite as gaudy as it does in the stock photo but it does remind me of the Bond No. 9 approach to bottles: the bigger, the bolder, the 'better'.

Given what I know - i.e. that it's not really a 'new' Aventus with melon etc. - I probably wouldn't have bought a bottle, even with the novelty factor of having the anniversary bottle. I would probably have preferred to find an older batch more akin to my tastes - but then who knows how this will develop.

I hope that helps.

CHANEL N°5 – THE FILM by Jareth

Green Notes in Perfumery by Birnam_Wood

Ormonde Jayne: The New Way to Find a Signature Scent Online by Vanian