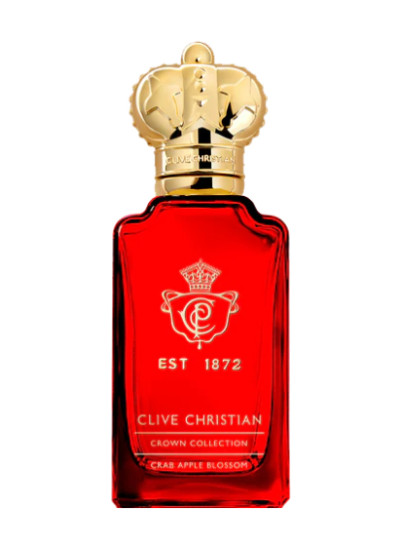 Clive Christian
Jump up and Kiss Me Ecstatic

Maison Martin Margiela
By the Fireplace

This is a rhubarb bomb. I certainly get the Mojito vibe, which immediately reminded me of the 2008 release Guerlain Homme for men. I also get a vibe of the strong bergamot similar to Mugler Cologne.

As someone who has adored and worn Creed VIW as a signature scent for almost a decade, I don’t any get Creed Virgin Island Water like the previous post mentions. There is zero coconut in Crab Apple Blossom. As they say "scent is highly subjective."

While I do find Crab Apple Blossom to be straight up unisex like VIW, it lacks sweetness. I find VIW much more refined, while Crab Apple Blossom is more of a linear and rounded scent. I would never even think to compare the two fragrances.

Clive Christian Crab Apple Blossom is certainly a high quality scent, but nothing special or unique. Surprisingly, this lasted longer than expected on my very dry skin. I could smell it for around 4hours, which is very good for me.

At the end of the day, I regret my blind purchase. I think Guerlain Homme is a much better choice for this type of fragrance.

I just got this in so I wanted to write a super quick review and I will update the more it develops...

Right off the bat I IMMEDIATELY thought of Creed Virgin Island Water. I know it isn't listed, but I swear there is coconut. Wow...this is like the modernized VIW with a slightly woody backbone so far. It smells amazing, but I am a little disappointed it smells so much like VIW.

So after my initial update, the rhubarb starting peaking through to give this a sour/fruity nuance which was awesome...but that died soon after. It settled into a Creed VIW relative. If you can picture VIW with a little more marine and a little less coconut, well there you have it. This is all in my own experience, and my nose is by no means an expert, so take this review for what it's worth.

Unfortunately, I am going to have to give this a thumbs down. Before anyone judges me, I have a collection of almost 20 full bottles of CC fragrances. CC is my favorite brand all time, so I am being completely honest.

I think another thing that disappointed me was the lack of masculinity. I commented on a picture on the official Clive Christian Instagram and asked if this leaned more feminine or masculine and they responded with some bland answer of, "this is unisex like all Clive Christian perfumes." Well, the ONLY time I would ever wear this is on vacation in the tropical islands with a super sugary, fruity drink in my hand sitting on the beach.

I think my expectations were fairly high seeing as I have spent thousands on CC in the past. I have found that a majority of my CC perfumes take me on an adventure, some sort of twisting roller coaster before the final destination, but this one seems flat and sort of lacks that classic CC "character."

Much to my respect, my expectations SHOULD be high with the price tag, but that's another story. I have no place to talk about that, I just simply expected more I guess.

Don't get me wrong it smells good, but I will say SAMPLE FIRST!

Overall: If you absolutely love Creed VIW, you will be sure to love this one. For what it's worth, my wife said this is one of the worst fragrances she's sniffed in a long time. Just didn't click with her nose, I don't know!

Tonight is on skin while last night was on paper. Im getting more rhubarb on skin and less of the VIW resemblance, but I still cannot separate the two. They are 100% in the same genre. Crab Apple Blossom has a sourness that VIW doesn't have and VIW has way more coconut, but nonetheless similar to my nose.

Let me start by saying I understand the sentiment that this is most likely overpriced. Then let me continue to say that I don't care at all.

I received one of the first bottles in circulation today and I love the opening a lot. The middle and dry down remind me a lot of rock rose, which I also love but I wish the top would stick around longer. For the price I don't really want to keep applying to get my favorite part all the time.

I'm two hours in the projection is not where my other clive Christians sit either. Longevity has not slowed by its resting a lot closer to the skin.

Update: scent is almost gone 5hrs later. I'll give it another wear tomorrow and see if it wears different or changes in any way given bottle rest

I kind of regret the purchase as there is many other scents I'm eying. However, there is nothing to hate here. It's super unisex and will get compliments, if people can get close enough, and will not turn anyone away. It immediately falls to the bottom of my clives, behind cypress, x, and Papyrus in that order.