Signoricci fragrances, like many others of Nina Ricci's heritage, have been discontinued by the new owners of the brand. 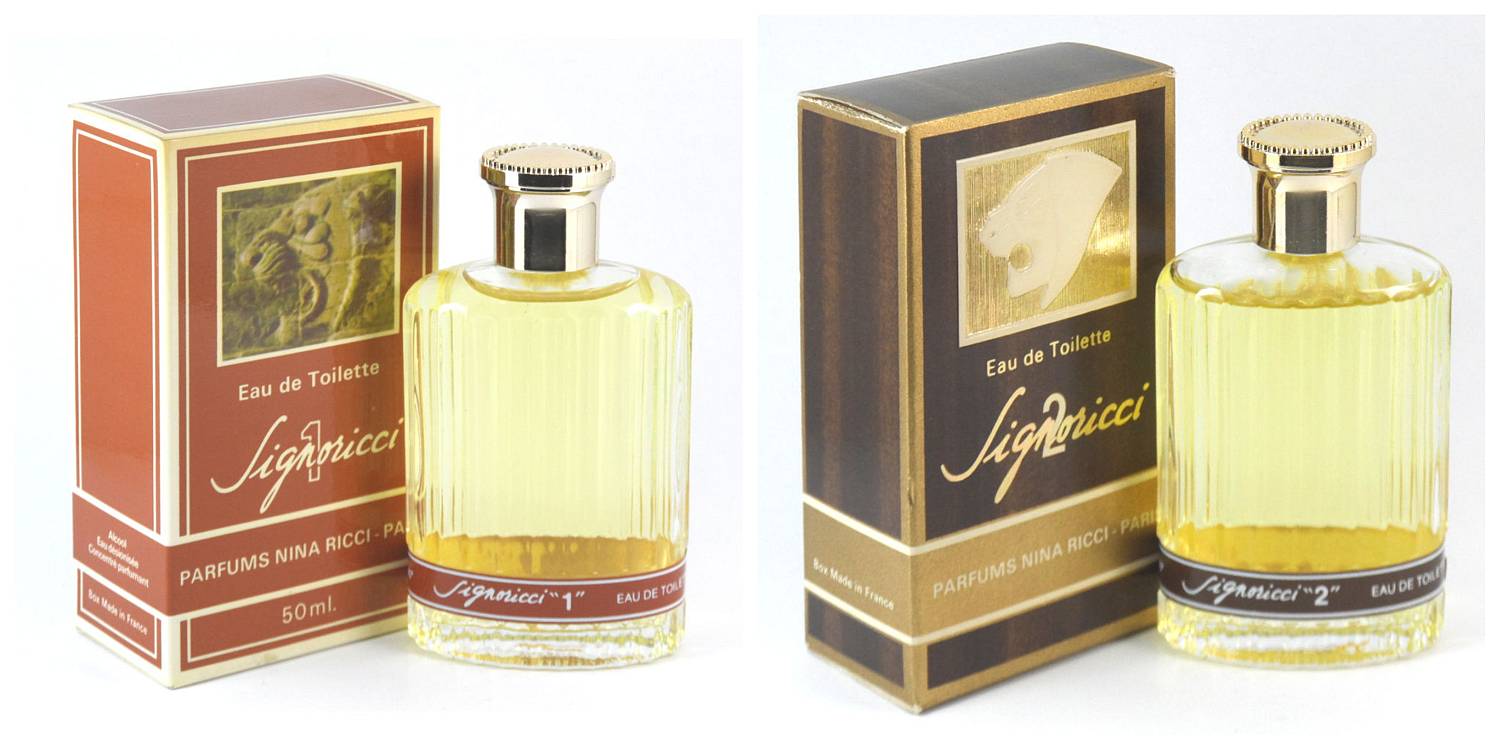 For some time, about ten years, they coexisted in production, but after the number one was discontinued in the mid-1980s, its name was assigned to the second number, and Signoricci 2 became known as Signoricci, which should confuse consumers. Although the cologne was left citrus in the 1990s, its formula was also changed. While many considered this citrus cologne in a textile-designed box to be the gold standard for light freshness and transparency, it was redesigned and released in a new gray packaging in the early 21st century. It was like, "Dear customer, it is easier to forget about Signoricci and buy Eau Sauvage than understand all the explanations!" 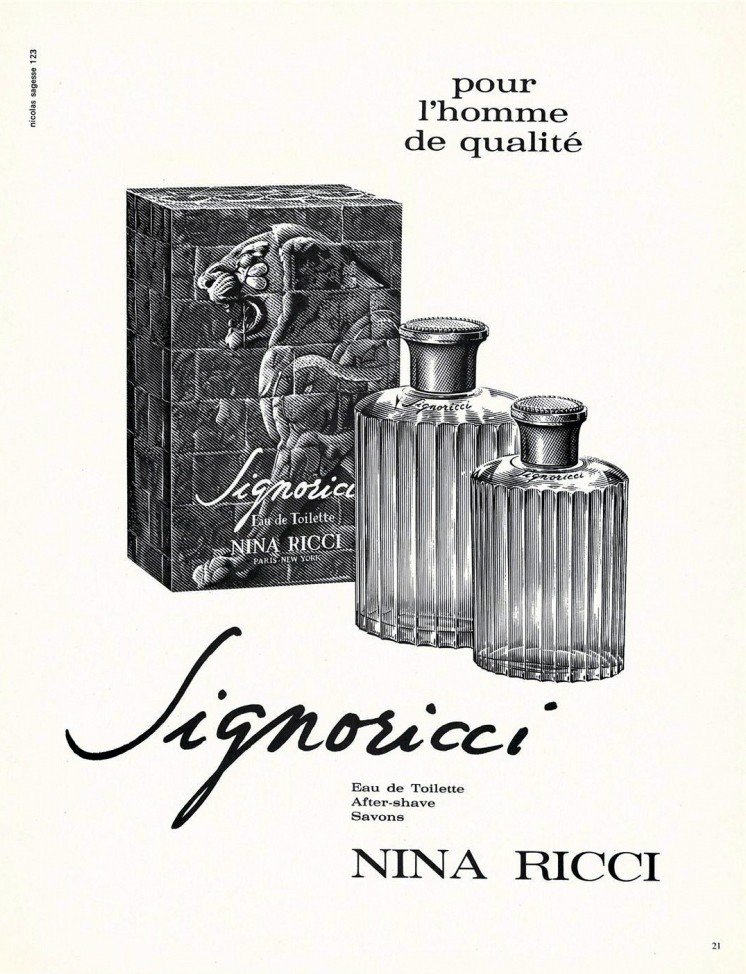 So maybe I should have just forgotten about it and chose something else on the citrus theme? However, I was stopped by the fact that the perfumer who created it considers Signoricci 2 to be his best creation in his entire perfumery career.

That being said, the list of his creations is impressive: Boucheron Pour Homme, Yves Saint-Laurent Pour Homme, Ho Hang Balenciaga, Bleu Marine Pierre Cardin, Monsieur Couturier, and he also co-signed Opium YSL, Anais-Anais Cacharel, Givenchy III, Parfum d’Hermes, Molyneux Quartz, and many others. Who is he? Raymond Chaillan, the perfumer who was President of the French Perfumers Society and mentor of many other perfumers, and it is worth listening to his opinion. 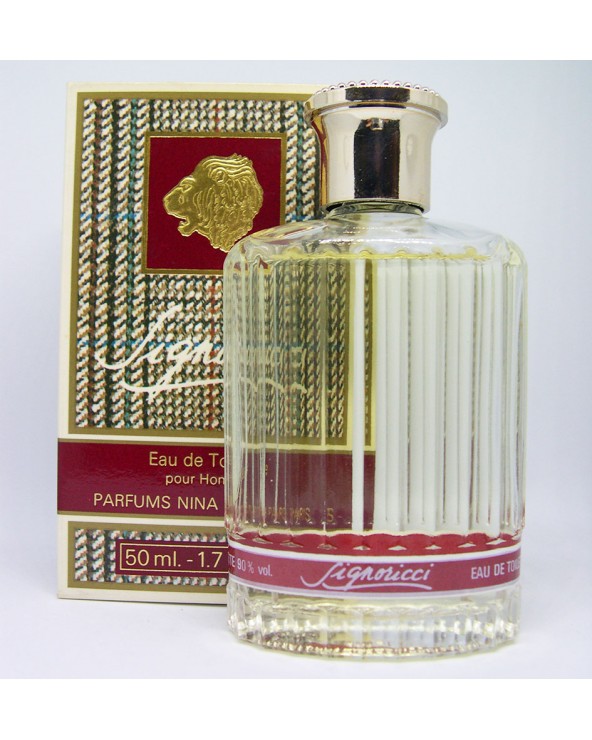 I could not find the original Signoricci 2 from 1975, but only a modified version of the early '90s, in a Lalique bottle, boxed in a woolen fabric-textured box (see above). I had to focus not on the name, but on the smell. A subtle bitter scent of citrus fruits, a cold transparent trickle of bitterness, compared to which even Eau Sauvage smells like a luxurious and rich fruity chypre. Joyful and bitter, an almost imperceptible scent of lemon zest and crumpled lemon leaves against the background of Hedione glow, lily-of-the-valley crystal tinkling and a weightless calming aldehyde-musky haze. At the time of its launch, Signoricci should have clearly looked like a hologram from the future. An imaginary future in which fragrances are not shoved with each other in sillages in a lift cabin and do not compete in lasting time on the subway. 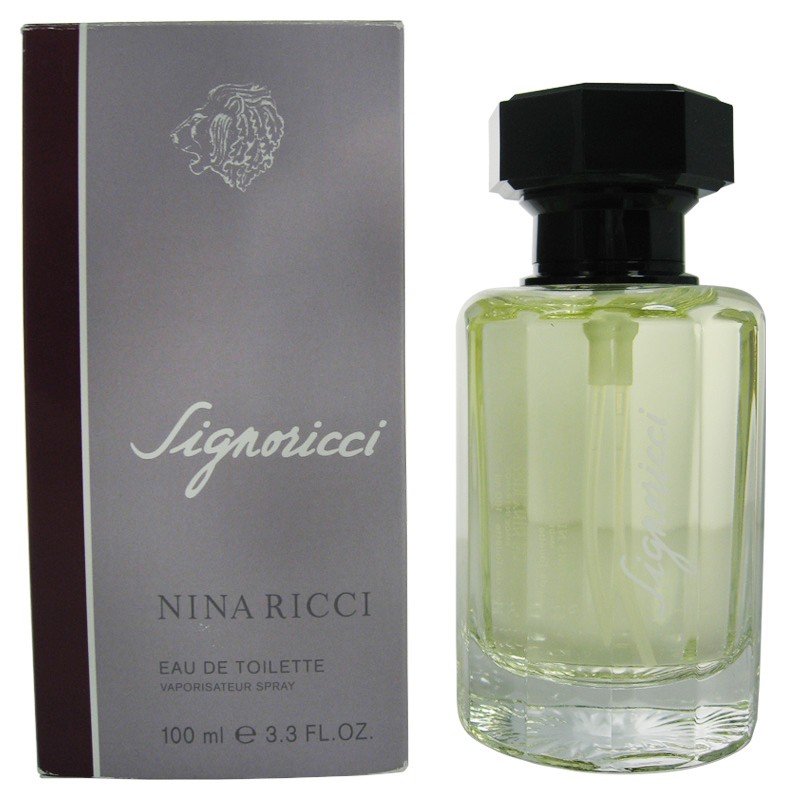 Raymond Chaillan managed to calm down even the initial citrus notes of Signoricci. Instead of a lemon explosion, it is as if a cozy lamp of a washed-out yellow-green glow turns on. I have met a quiet natural glow of the same nature in the heart of another forgotten masterpiece, Choc de Cardin, the perfectly transparent lemon chypre by Françoise Caron.

The light, dry, and warm mossy sillage of Signoricci makes the scent an example of moderation and sobriety, a scent for a person who has something to do but measure up with perfume sillages. In stamina and projection, it is inferior to the symphonic Eau de Guerlain, the aristocratic Eau d’Orange Verte Hermes, the popular Eau Sauvage, and the cheap, laurel-spicy Agua Brava Puig. Don't seek it for the sake of durability, as not everyone would like it, only lovers of citrus colognes in the classic style could really appreciate its moderate style. Those who do not mind literally washing their faces and bodies with cologne and carrying a bottle with them — and at the same time not raising the questions "what scent do you wear?" — could be their owners. 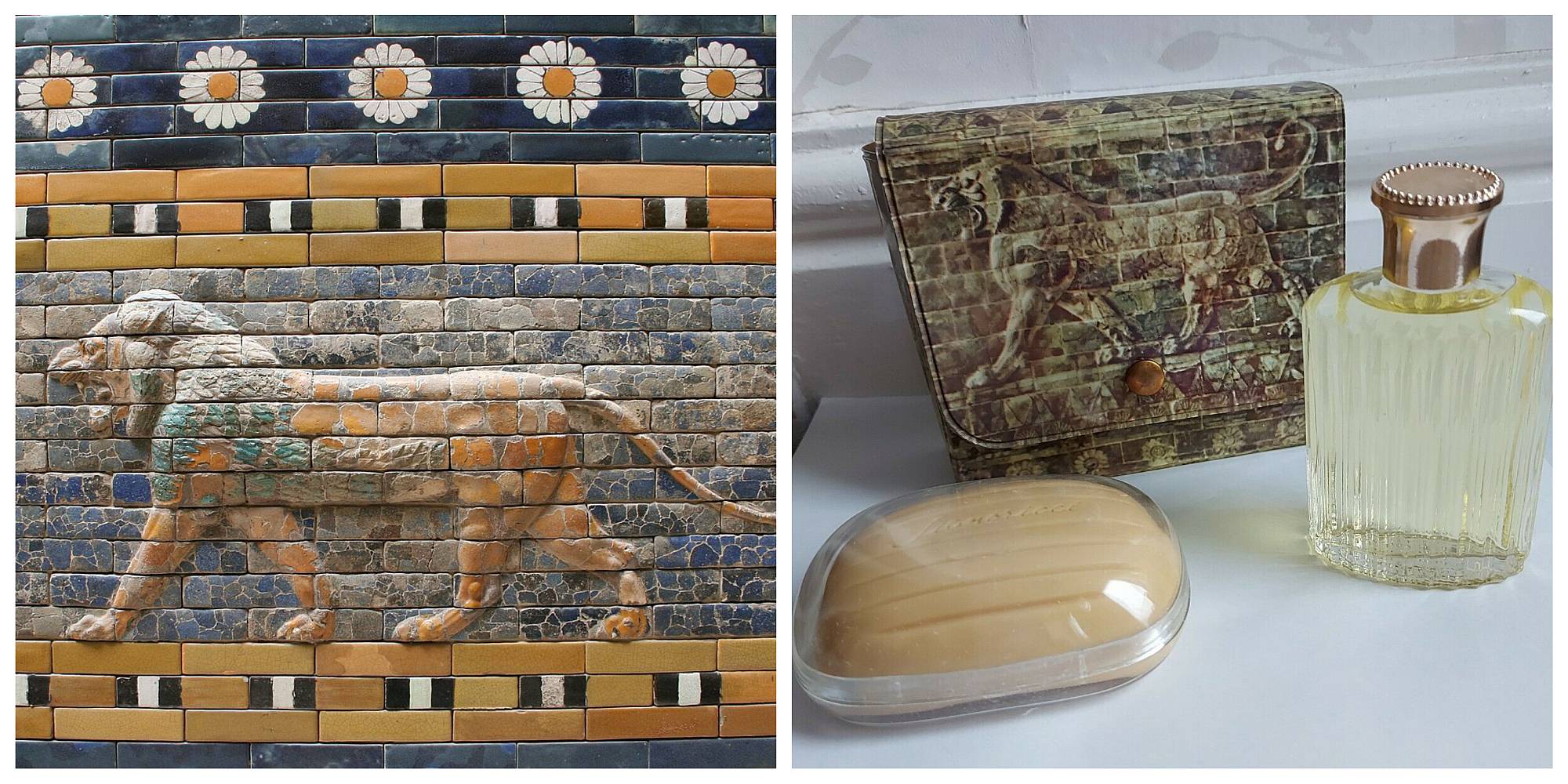 Each Signoricci package is decorated with a lion head profile of different colors and textures. It's a symbol of supreme power taken from the walls of ancient Babylon (taken away by archaeologists to Berlin and now split into dozens of museums around the world). The better version of Signoricci 2, the first edition with the number 2, guarantees the original composition by Raymond Chaillan, but the scent in a Lalique bottle will do just fine. 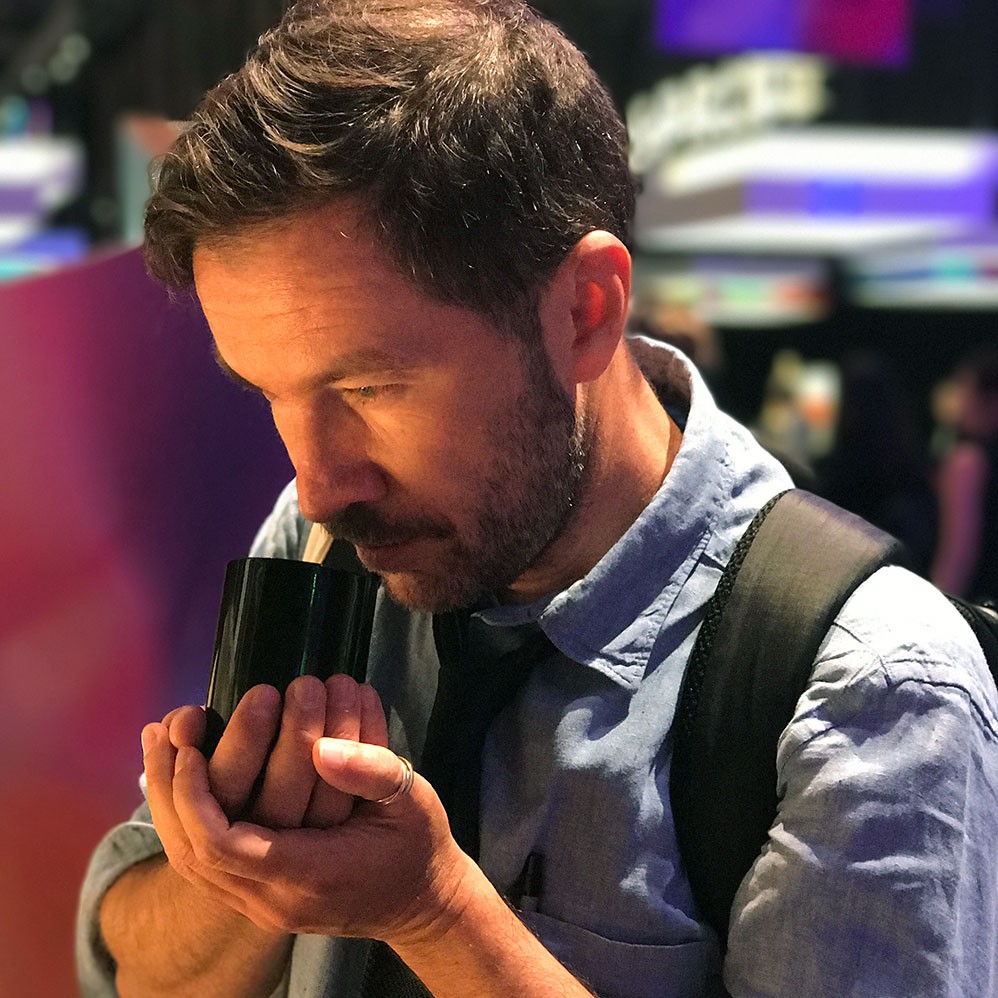 Sergey Borisov studied Physics at Krasnoyarsk University. He's been known in the Internet perfume world under the nickname moon_fish for more than 15 years. His texts about perfumes have been published in Russian print and online publications such as GQ, Vogue, Cosmopolitan, The Rake, Glamour, and other magazines. He loves oud oils, as well as vintage perfumes, and notes of leather, vetiver, neroli, and orris. In 2013, Sergey joined the Fragrantica team.

Mid seventies classic, a standout gentle and elegant restraint, and just the way it should be. Ricci ruled Supreme!

Signoricci 2 was the first scent I wore, I was 16, a gift from my Father. Decades after I found one bottle for sale, I bought it as a present. He passed away (he was 86) and it was taken by my Brother. I assume that Signoricci is for my family the smell of times gone by (funny an article about Femme de Rochas was published today: this would be family's women smell of the past).

As to the original, correct me if I am wrong: I have the feeling it is a floral green with a huge tobacco note. I do not want to contribute to the hype... but it is, by far, the best composition I ever smelt. Not that we liked it as much as 2, however, really original.

Please note these blends play according to old-time rules: silage and longevity are those of men's scents as it was back in the old days - limited. Just forget any Signoricci if you are looking after the "complain-combo", you will have to fast forward to the 1980's.

Glad I got two vintage bottles,love it

Zara
Red Temptation For Her by Queen of Sheba

By Kilian
Back to Black by mutatismutandis