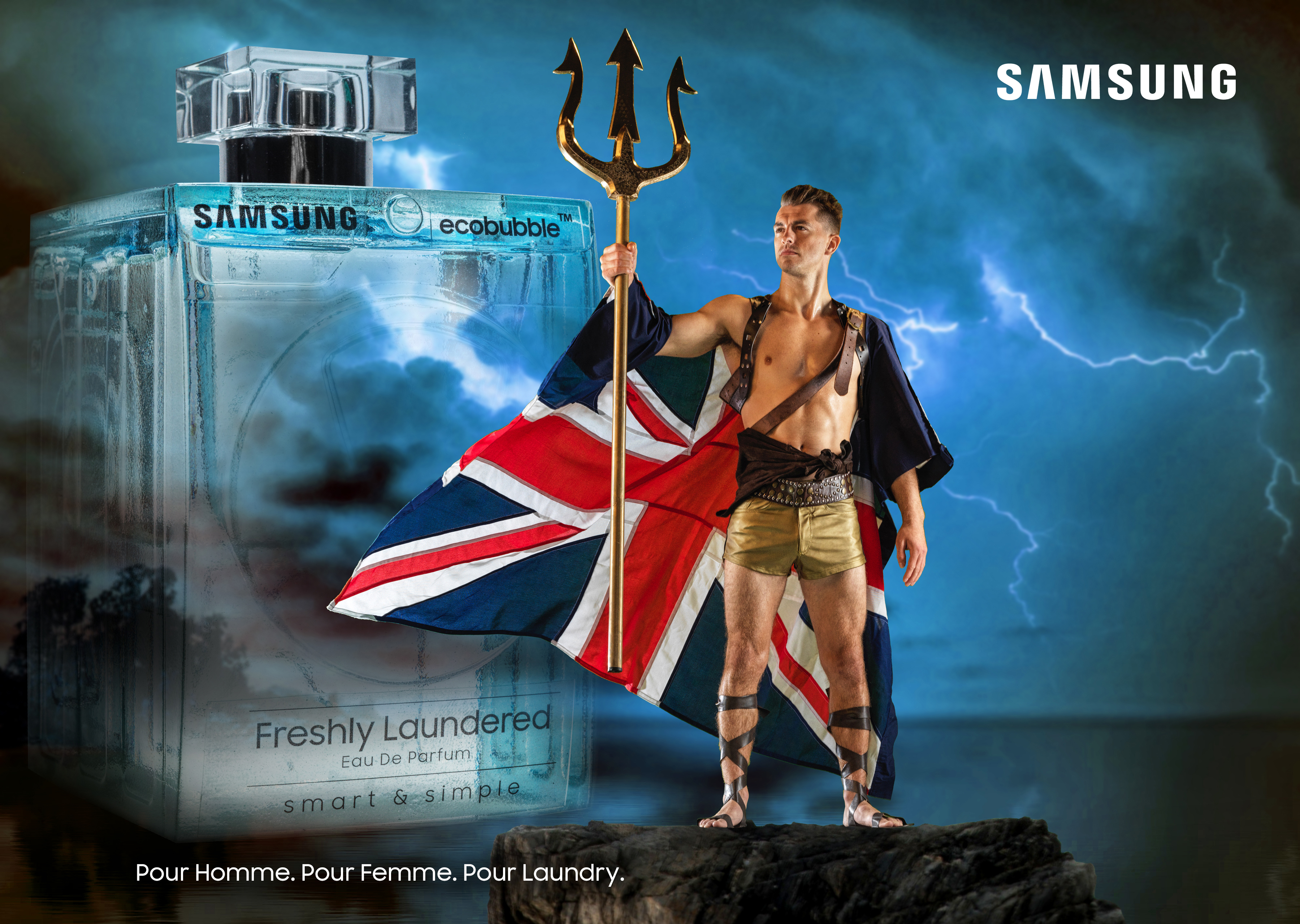 British perfumer Sarah McCartney was commissioned to create “the elusive smell of clean sheets and machine-powered freshness,” following a Samsung audit of 2000 British adults of which 77% noted “freshly washed laundry” as one of their best-loved smells, followed by clean bedsheets with a 69% share. The final scent contains “four musks which evoke the smell of a fresh garden and fresh water, paired with aromas of lily-of-the-valley.” 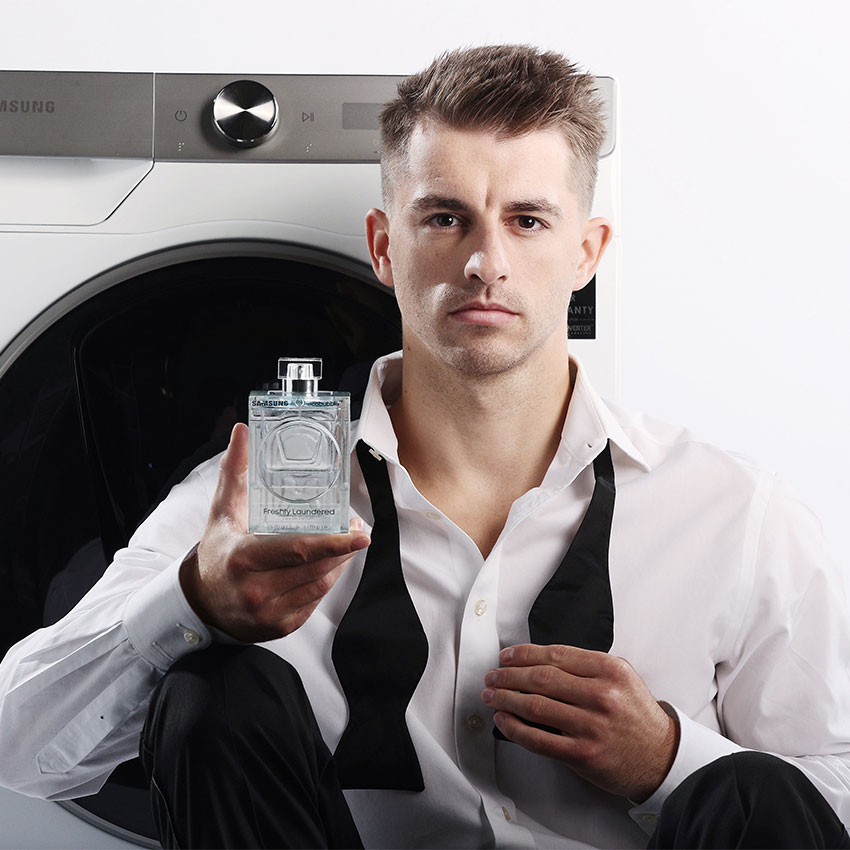 L’Eau de Laundry will be available to customers who purchase an ecobubbleTM washing machine from Samsung KX – the brand’s concept store in Coal Drops Yard, King’s Cross, London. They also say that a select number of bottles will be made available to win via Samsung’s social channels.

If you like the prospect of a comforting fresh laundry fragrance but won’t be making a trip to London’s King’s Cross to buy a washing machine any time soon, try Clean Reserve’s White Amber & Warm Cotton, Maison Francis Kurkdjian’s Aqua Universalis, or Hugo Boss’ Wool Musk instead. 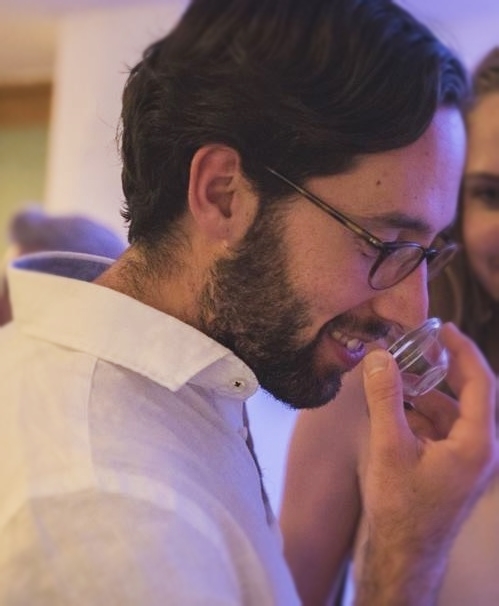 Eddie Bulliqi is a writer and speaker who analyses what people want from their senses, specialised in the interpretation of tastes and smells, with a background in musicology and history of art. He has worked with Coty, the Estée Lauder Companies, Esxence, the Institute for Art and Olfaction, and the World Perfumery Congress. For Fragrantica, he produces trend reports, interviews, raw material studies and reviews.

For once Samsung is ahead of Apple....

Men will be confused by this because most of them don't know that "laundry" is actually a room where dirty clothes mysteriously get taken to and washed.

The poster looks like a 90s version of Invictus ha ha ha !

I won a bottle! Can't wait to try it out!

Ahahaha I love the parody on perfume ads. As much as I love fragrance, I have long found the ads esoteric and often off-putting. I checked out the article because I was mind-blown by "Samsung Launches Perfume" alone, but this is just fantastic. As for the scent, I'm really with the 53% of Britain that loves freshly-brewed coffee scent best, but hey, I love the Clean line, which is based off soapy-clean scents. Free perfume with a washing machine doesn't sound half bad! Last time all I got were some confusing hoses and a cardboard box that barely fit back out my door.

OF COURSE this is a parody! And you’d think the Chanel adds with Brad Pitt and Gaspard Ulliel (Mr. ‘Bleu’) were a too, but no.......

Ow okay so this is a parody, cause I was already asking myself why they dressed him in the cheapest spartan Halloween costume.

Yes, the sweet scent of a sweaty gymnast, sign me up (for the washer) haha. The washer looks questionable and the perfume is not appealing, but it definitely is a memorable ad and made me laugh. I love it

@francois75 check out the collaboration Le Labo did with The Laundress...

Introducing the newest Olympic event in the Men’s Gymnastics category. The Pommel washing machine. At least you can wash your sweaty clothes after the meet. Every pommel horse sitting in a gymnasium, somewhere, is so jealous! Lol - Oh, by the way, no, I didn’t overlook that prolonged stationary hand stand. The amount of upper body strength required is mind boggling. -Matty-

This is the most idiotic thing i have ever heard. What's next? Laundry soap companies are going to launch their fragrances? Ohhh what are you wearing?.... Eau de Persil with Oxy???? WTF!!!

I honestly thought this was a joke.
What. The. F**k.

Brad Pitt is like Robert Redford reincarnated before Robert Redford is dead; parallel universes overlap; the space-time continuum dissolves into nothing and everything ad infinitum.

These types of scents are great for candles, not perfumes. I still can't understand how Replica fragrances sell. They pretty much smell like candles, not fragrances. Bring back old school fragrances, and stop watching youtube shills.

That Samsung add was quite gringing! the washing machine ruined the ad! i thought for once (before reading anything) that it was an "Invictus" new variation Paco Rabanne but nope.. it was Samsung and i have absolutely no idea what does the baby eating chocolate, & the horses had to do with the blend! .... But after all, they respect their customers cause they still sell their phones with a headphone, & a charger ;)

Missed opportunity not to sell it on its own (yeah I get they want to sell the machines) but I love novelty stuff like this.

Charming sillyness! Personally not a fan of über clean scents, but it might be good considering the perfumer.
The Brad Pitt ad - cringe! “Wherever you go, there you are” Sounds like something Fred Armisen would say in an SNL skit, or Jeff Goldblum on a talkshow

You just have to love that dry english irony. I dont think that people really get it. This is very little about the perfume - the real product advertized here is the Ecobubble. I just adore this sarcastic take on the ridiculous adds from the perfume industry. Maybe you have to be european to see why this add is hysterically funny. I can imagine someone like Rowan Atkinson aka Mister Bean to have directed this add. Most people don't care about washing maschine adds, so they invent another product that people love - perfume. Then they sneek the washing mashine in under cover of the perfume. This has to be the sexiest washing mashine add I ever saw. Keep them coming.

I thoroughly appreciated this commercial. The confusing Brad Pitt commercial (was he trying to win back Jennifer Aniston)? I'd never seen it before, but it made the Samsung one that much more enjoyable.

Apple, where is my white rectangular iSmell?

As bizarre as this is I'm glad at least that the ad is supposed to be a parody, otherwise I'd have been extra concerned ??Also have to admit I love that washing machine bottle!

This must be for those people who loved Colgate pizza. Can't wait to call customer services and tell my Samsung has lost its top notes and when they ask what product I am using I will just continue babbling on using perfume terminology.

Also this could be the hipster dream. What are you wearing? Anthony Hopkins layered with Samsung.

This sounds like the worst marketing idea since the Ford Edsel. Does Samsung make toilets? If not, they should because I see this "idea" taking a Giant Flush within the fragrance community. Next!

Kudos to Mr. Whitlock for keeping a straight face. His manager must have had some explaining to do.

Just think, years from now, one of us perfume freaks will find a bottle of L'Eau de Laundry while cleaning out our mother's laundry room and will have a good chuckle.

I like the washer shaped flacon. Reminds me of the novelty Avon bottles of yesteryear. (Coming back in Vogue again, I might add.) Also, sadly, makes me think of Depression Era marketing add-ons. Hope it doesn't come down to that.

The man is very hot and the ad is funny. Sexy men doing laundry? Even better! It works for me. I love the ad, I love Samsung.

It's true, clean clothes are undeniable. Add in clean sheets and you have my idea of a perfect day.

I'm sorry I cannot stop laughing are they serious, Mercedes were bad enough with the new car smell but this takes the cake and the guy jumping over the washing machine???? I'm waiting for Jim's mowing to release fresh cut lawn

Nice idea, I love the picture of the guy with the flag, and the bottle looks nice. I wonder about the smell. I love doing laundry and clean clothes are awesome.

*yawn* where’s the Anthony Hopkins one? As ridiculous as it sounds, I’m dying to see the notes.

That is the exact outfit I bought for handing out candy this Halloween! Well, now it's back to the drawing board.

OMG !!!!
I thought i've seen everything, and now comes Samsung ??
What next ???
Tupperware's smell of clean plastic containers ? ??

This is so odd to me, but I'm curious!

I don't need a new washing machine, but if they give the man together with the perfume, I may think of buying it.

This is my new favorite perfume ad. Exotically ridiculous. And there is subliminal flash of a horse.

Love the bottle, too.

The still photo at the top of this article looks like a riff on Versace ads! I hope Sarah McCartney also had fun on this project.

Not impressed with Samsung customer service! I want to speak to your manager!

what
also...
2000 British adults of which 77% noted “freshly washed laundry” as one of their best-loved smells, followed by clean bedsheets with a 69% share.

imagine being this boring

If this was stain remover as well ... sale made.

Is it aggressive on coffee stains....

Smart and fun idea. Not a huge Samsung lover, but this looks good!

Does it come with a warranty?

MAC
My Heroine by manpen

ScentXplore: Coming to You Virtually this Weekend by Houdini4

Interview with Nathalie Lorson: YSL Black Opium and Other Addictions by vanillaOrpatchouli

What Scents Help You to Feel Safe? by maddyrenel

This or That? Skanky vs. Clean Musks by Rav Pahud