Most often, a flanker is an attempt to bet on the popularity of a successful fragrance and make one (or more) of almost the same yet not quite identical perfumes. However, sometimes a flanker is a bug fixing project. In the case of Idôle and Idôle L'Intense, I think that the 'update' was worth it. Those who like Idôle don't lose anything, but those disappointed in the original release get a fragrance with an entirely different personality, still housed in the same pretty and slender flacon… 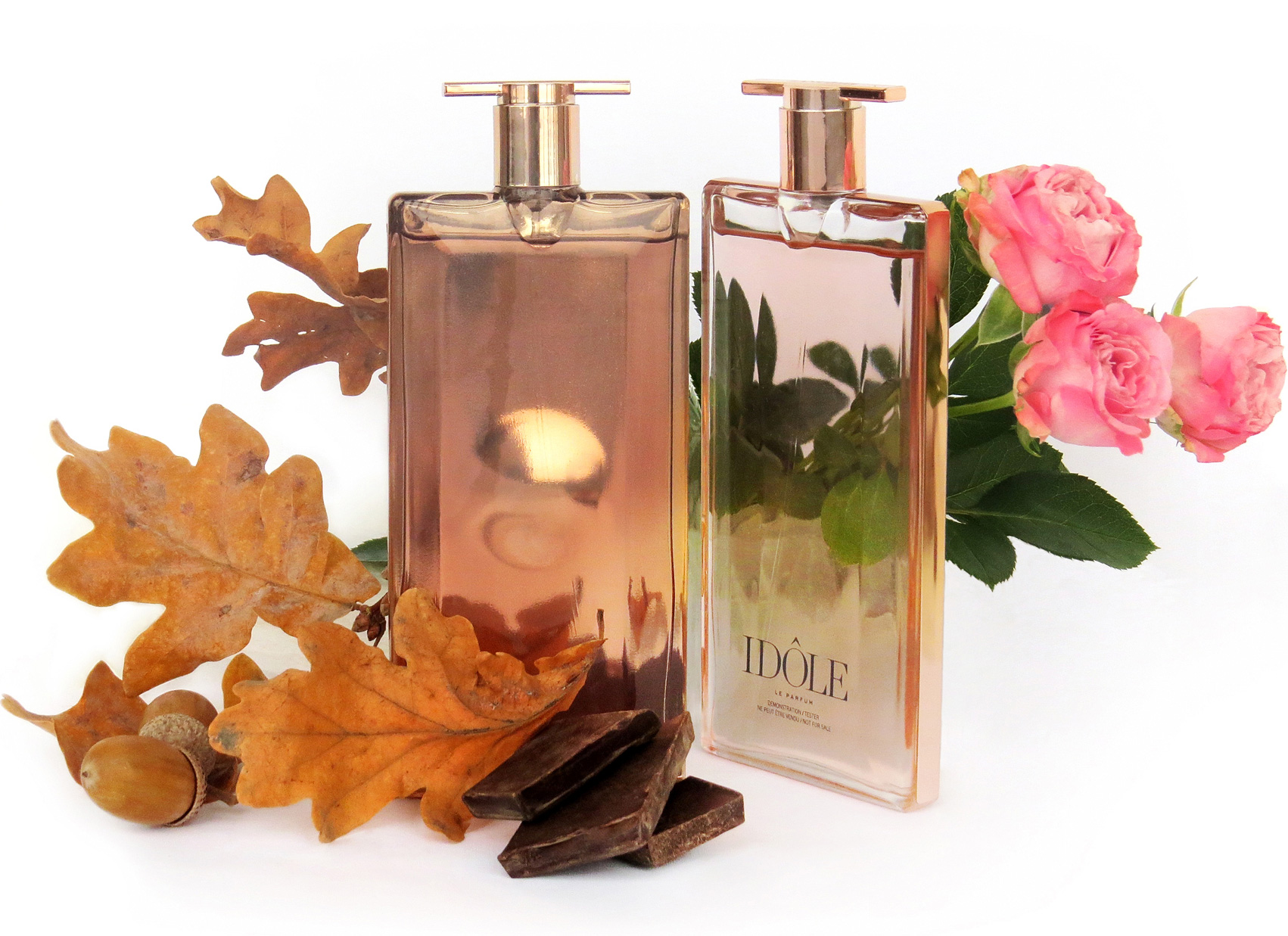 That said, the flacon is not made of transparent glass; it has a pink and gold sheen instead. I am not certain which one of them is prettier, since both are very attractive, but when it comes to the two aromas, I definitely choose the flanker: Idôle L'Intense.

Idôle by Lancome was a release people had been waiting for impatiently. We were promised not only the unique 'slimmest flacon in the whole wide world', but a chypre fragrance, too. Many people ordered a mini flacon – and were very disappointed. No chypre whatsoever could be sensed in Idôle. Not even a subtle hint of a chypre... Nevertheless, when the initial disappointment of unmet expectations had passed, I was able to appreciate Idôle from a different perspective, i.e. simply as a new fragrance.

Idôle was attractive in cold weather; a sharp freshness, some soft soapiness, a very tender rose with very long and spiky thorns. In the cold, Idôle was redolent of a naked rose emerging from her bathroom still smelling of soap and warm from the shower. However, after a certain amount of time, the soapy note turned into a sharp fresh one - and the rose dressed herself in spiky clothing, remaining naked and warm underneath. 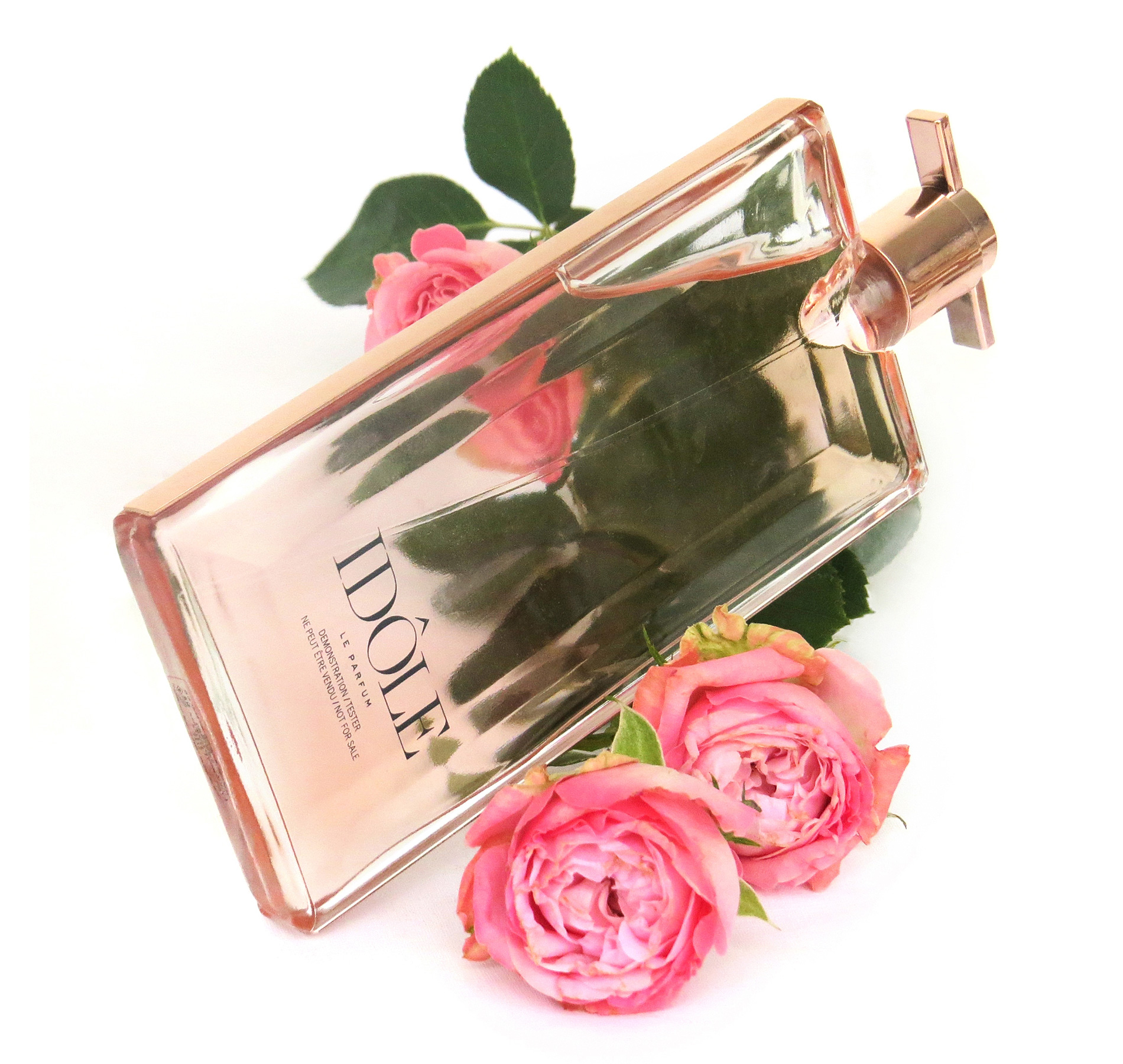 An everyday office fragrance, yet one with a twist, which for me was not the pear juice that suddenly seeped through the thorns, but the tenderness, warmth and near corporeal quality of that rose-woman.

Summer proved to be a less than perfect season for Idôle. For me personally, the fragrance turned into the smell of any airport's Duty Free shopping area coupled with the aroma of "Duchesse", a vintage, pear-flavored soda from my childhood.
And yet autumnal, colder weather returned and, again, the same naked rose reappeared right out of her bathroom. Warm, languid, smelling of soap and cleanliness. Her thorns not too long or spiky yet. But she already comes with a basket of ripe, not overly sweet pears bringing their natural pear sweetness. She was not that bad, not like it seemed when I had first met her. That naked soapy rose has some definite charm to her. And at least, she did not cover herself with some melted caramel. She is not killing anyone with her sweetness. She may slay you with her harsh musk, but musk's range is generally smaller than that of sweet notes.

I was not waiting for Idôle L'Intense by Lancome at all, since I was not hoping for anything remarkable whatsoever…

I was very surprised when I sprayed it on my skin. Idôle L'Intense was redolent with Fall. It smelled of the spicy, aromatic quality of fallen leaves and the bitterness of wet bark, ripe acorns and tree moss… It is nearly the very chypre promised before the release of the original Idôle! Well, no, it is not quite a chypre, certainly not the classic, recognizable scent of chypre that you cannot mistake for anything else, but the bitterness and the general aroma of tree moss is quite noticeable in Idôle L'Intense.

Nevertheless, there are still many sweet notes in Idôle L'Intense: in the first half hour it seems very sweet - chocolate patchouli, ripe pears, candied apples and candied orange peel. I almost managed to get truly upset, thinking that Idôle L'Intense is yet another fragrance dessert, smelling the praline and soft caramel notes in near despair. 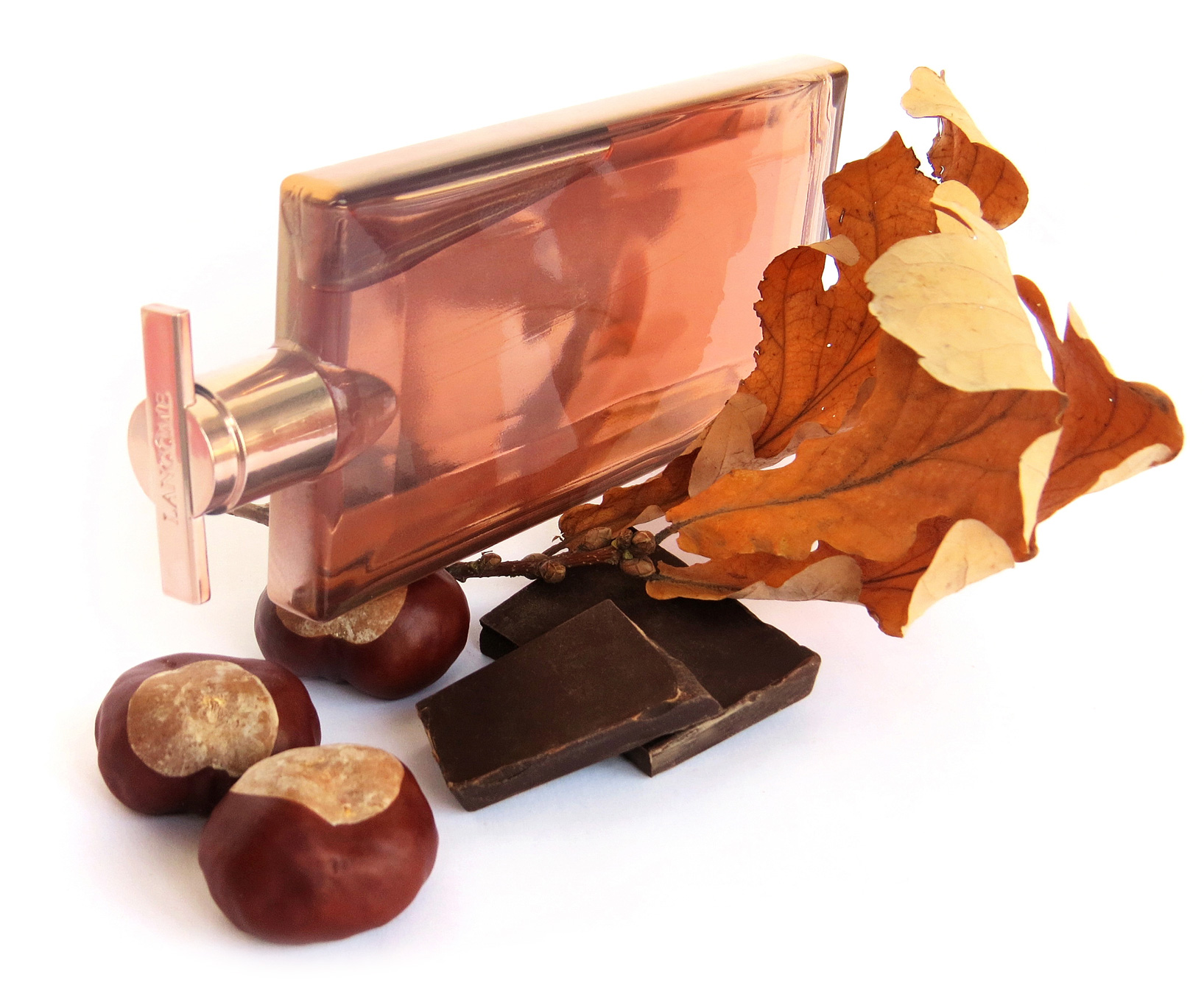 However, bitterness won the battle in Idôle L'Intense . It pierced the sweetness right through, with oak tree roots and mosses sprouting vehemently. The fruity notes did not disappear altogether, but they calmed down a bit. The aroma of dark chocolate blended with the scent of fallen leaves; the scent of an oak grove in October. Idôle L'Intense remains that way for some time... It does not last longer than a couple of hours, but it is this stage of the fragrance's development that I enjoy the most.
Then the somnolent oaks begin reminiscing of summer.

Through the bitterness, spiciness, patchouli, chocolate, and bright flashes of fruit, some ghost roses, smelling cold and discreet, start emerging like a fog over a rose garden. The ghost of a long since wilted acacia tree suddenly throws a handful of vanilla smelling pollen into the brisk air.

An acorn bursts suddenly, sprouting a single jasmine flower instead of a new oak tree; just one flower, but it, too, will join the slow dance of ghostly summer flowers…

The autumnal aromas in Idôle L'Intense, i.e. patchouli, chocolate, fallen leaves, bitterness of oak bark and different varieties of moss, the viscous, sweet scents of overripe or candied fruit, are brighter and more intense than the rest, they create the dense velvet heart of the fragrance. 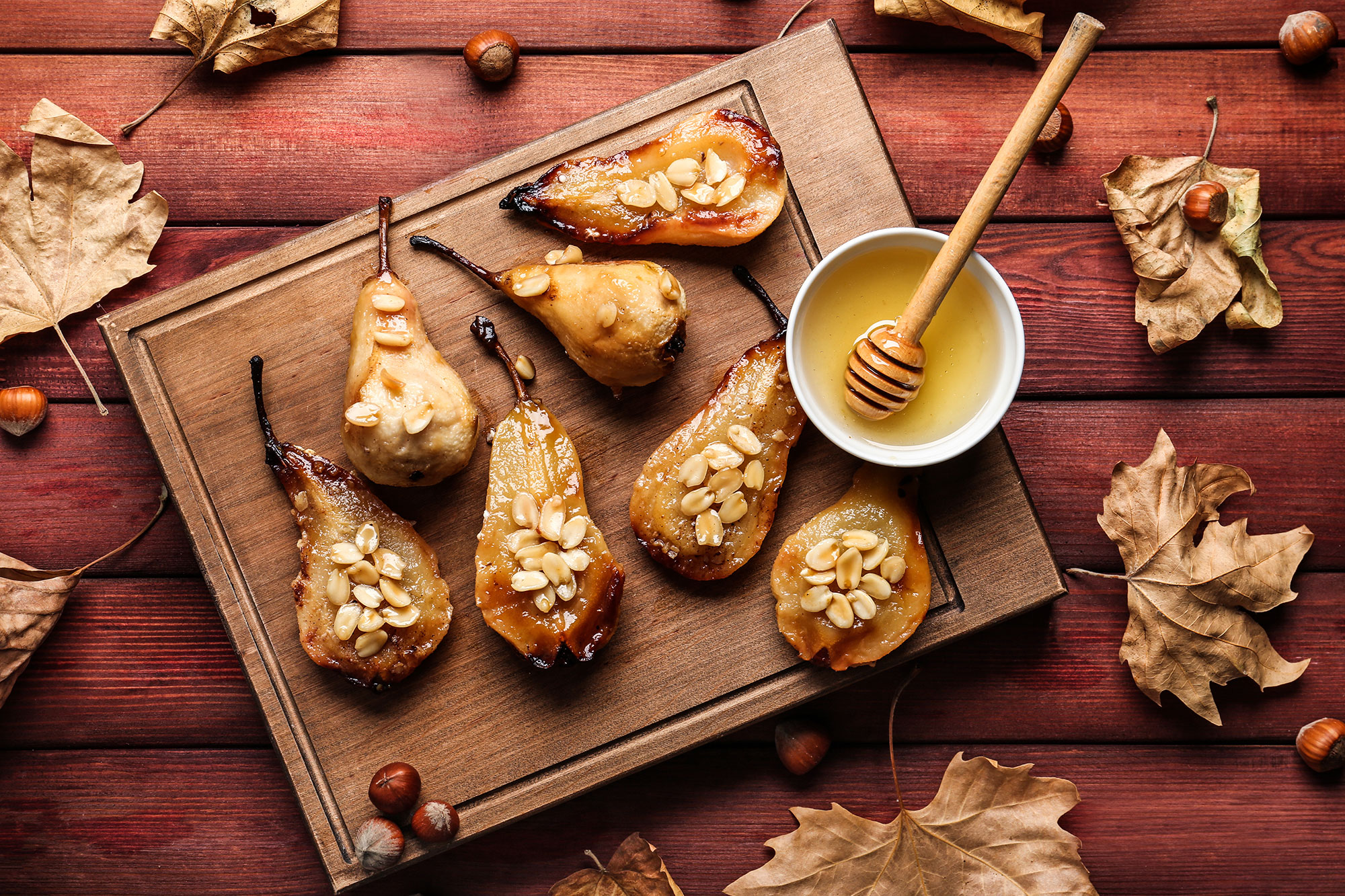 However the floral ghosts is what gives Idôle L'Intense volume, making the fragrance truly dressed up.

In my opinion, the only things Idôle and Idôle L'Intense have in common is the shape of the flacon and the fact that they were created by Lancome. Well, the sillage and longevity, too. The flanker's sillage is superior to the original, but the longevity, in my opinion, is a bit excessive in both: after an evening shower, one's soul is in need of some peace and quiet from all the fragrances, but Idôle and Idôle L'Intense wil not leave you, only tuning down the volume a bit… 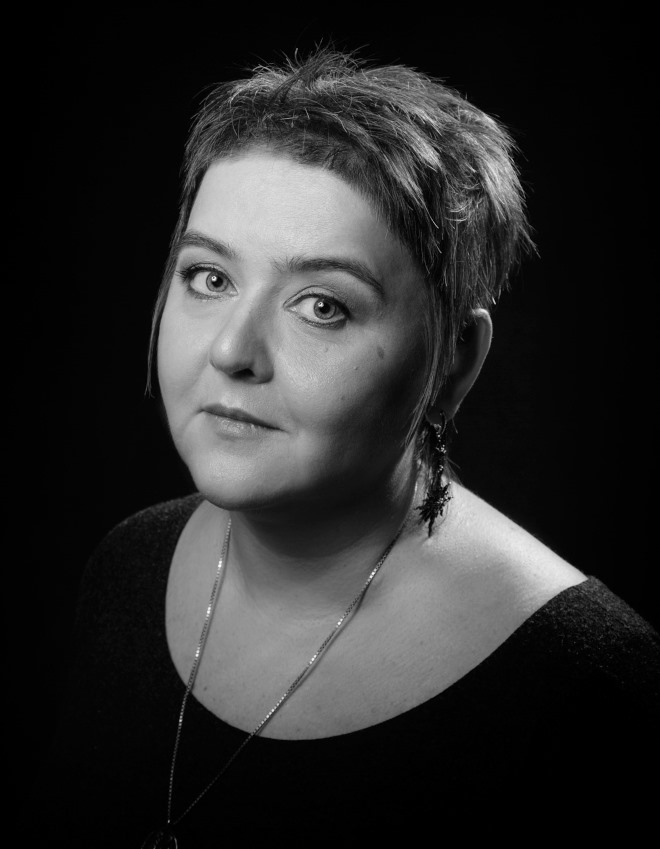 Elena was born in Moscow. She studied at the Gerasimov Institute of Cinematography and at the Philological faculty of Moscow State University. She is the author of several novels (some of those written under the pen name of Elena Klemm) and specializes in writing biographical books. She loves history, Gothic novels, tales of terror, ancient cemeteries and old maisons, St. Petersburg, Carcassonne, Blois, Siena, Toledo, and Cesky Krumlov. Her enamorment with perfumes dates back to her childhood, and now she has a profound collection of perfumes significant for her.

I enjoyed this article. What an interesting comparison. Fragrantica reviews are definitely getting better and better.

Pear is so tricky to get right in a fragrance, isn't it....? Autumnal ripe pears so easily become sickly, cinnamon-overload heady, puddingy, and rapidly outstay their welcome! Yet summery, watery, juicy bright pear is such a lovely surprise in a fresh, aquatic or floral scent... Or is it just me that thinks that? :)

Thank you for the beautiful words you said of my new signature Lanc?me Id?le L'Intense <3 I also love the original, and actually I really do smell chypre in it too and the more I wear it, the more complex it gets. The first time I sniffed it, it was just a nice fruity floral but the more interesting chypre-y facet is there on the base. :)

I feel like a lot of brands do this when they fail on there first try. Gabrielle by Chanel to Gabrielle Essence, Joy by Dior to Joy Intense. Almost always the second more intense version is more beautiful, more of what the public expected the first go around. But like why not release these versions first? It would create more impact. If they wanted to give us regular Idole the they could've released that second, in the summer and called it Idole L'eau or Idole Legere.

Yes, I truly agreed, The Idole birth version when I smelt first went to seek the chypre profile but found very late at the trail opening of the Juice. Opening impression was quite for me fantasies with floral-fruity concoction due to the heavy load of flowers and fresh fruity realm. Intense version is definitely more lethal than ever!!!

Still haven't gotten my hands on this beauty, but it's on my list..Now I need to get both!

Write your comment: Idole and Idole L'Intense in Comparison